When I paddle on the lake, sometimes a fish will jump up right in front of my board. It startles me everytime. And yes, sometimes I scream!

I have seen videos of people paddling with dolphins jumping up near their boards and wondered how they do that… I thought if I was paddling and a dolphin jumped up it would scare me 10 times more than a silly little fish.

I was wrong. It did not scare me at all… it amazed me, and my daughter.

My friend Magen told me we could paddle out to where the dolphins hang out. So my daughter climbed on my board and away we went. Paddling out the boat channel to the Gulf was quite challenging. I probably would have been fine on my own, but with an extra almost 100lbs on my board made it a solid workout (this was my training for my next race)!

As we neared the end of the boat channel my daughter squeals… “DOLPHINS!”

I dig deeper and push harder, against the wind and against the waves, in an effort to get closer to where she saw them jump. They jumped again and I continued in their general direction. Then more jumped, they were in front of us, behind us, off to the side… 2-3 of them jumping at a time. It was incredible!

After a while I would turn around and we would ride the waves back down the boat channel, watching, waiting to see another dolphin. We went in and out of the boat channel at least five times. Sometimes a dolphin would jump up and I swear he was looking me in the eye and smiling… I was of course smiling back as my daughter squealed in delight. Oh, I think he knew just how much joy he was bringing us. And then he’d jump again.

It was an experience that I wish I could have had on video… but taking my phone out on the ocean just seemed to big of a risk for me. So my daughter and I have the memories of paddling with dolphins. It was epic! The experience for me was epic… but to be able to give that gift to my daughter. There aren’t words.

Top Misconceptions OR Excuses Not to Pole or SUP 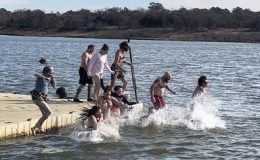 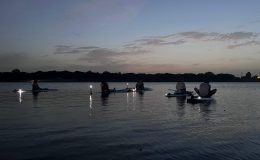 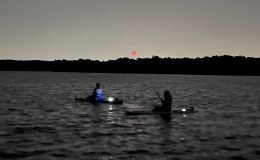